Banque de France reported that the cost of making payments is 1% of the world’s GDP or $800bn annually. The big number translates into 2 extra holidays for everyone, everywhere, every year.

They complained that 16% of all payments in France are still made using a paper chequebook. Processing a cheque costs ~€1 to the bank, which is then directly or indirectly charged back to the customers.

Just back from a daytrip to Paris, where Banque de France hosted a series of European central bankers workshops on retail payments policy. I was humbled to speak on a panel together with the World Bank, European Commission, European Central Bank and Western Union. 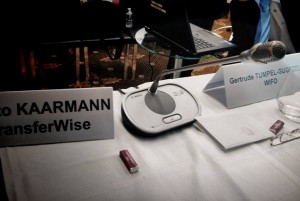 Very impressed what Europe has achieved with the Single Payments Area (SEPA). We have recognised that payments being the lubricant of any economic activity, then having a single payment system is a useful base if you want to build a single market for products and labour.

Our panel was about financial inclusion – how do we make sure that the less priviliged get equal access to modern financial services (banks) than the more privileged. It is not a big deal in Europe where 78% of working age people have bank accounts. If you exclude three countries: Romania, Italy and Poland, the banked population is close to 95%. Interestingly, the list of countries with high unbanked populations correlates with the countries boasting high proportion of shadow economy.

There are 58M people in Europe who don’t have bank accounts. Of these 25M wouldn’t mind having one and of these 2.5M have been rejected accounts.

World Bank is worried because the average cost of transferring money to developing countries remains at 10% not hugely helped by their 5% in 5 years programme, which aims to bring that cost down to 5% over 5 years (while only 3 years remaining to go).

Unfortunately, the poorest people pay the most. The cost of moving money bank-to-bank in the developed world is already ~5%, while TransferWise has brought it down 10x to 0.5% in many important corridors.

Surely, we cannot tell Western Union that now you have to lower your prices (exchange rate spreads) to make the world a fairer place. They will argue that sending money is a complex and expensive affair and people are willing to pay for it. As this is very true, there are really two realistic ways to bring the cost down:

The cost in making payments is driven by two elements – customer onboarding, with its regulatory overhead; and poor payment instruments.

Onboarding a  customer at a bank in the 70s used to be a costly affair. Regulatory requirements were there, but they made up a small part of the cost. Today the world has moved on and clever technology has made onboarding en masse nearly free for banks and payment services. But it has not brought down the regulatory cost.

Now regulatory KYC and AML can easily make up 99% of the cost in bringing on a new customer. It has become more expensive over time – Western Union claims, that their cost of regulatory compliance has grown 400% over the last few years. This is where regulators can make a difference to cost and inclusion straight away.

Secondly, we are still relying on very inefficient payment instruments. Cash being the worst and least scalable, our reliance on cards costs us 1% of trade flows on average, costs on Paypal are above 3%. The ACH network in the US and Direct Debits elsewhere have been set-up prone to fraud, so we spend another ~1% on tackling fraudsters or paying up losses. Modern advances, such as bitcoin, which shed the light on some super effective properties as a payment instrument, have been just discarded by regulators.

Europe has done a great job opening up the Single Market and lubricating it with the single payment area. There are great advances in Europe and this has made payments much cheaper here, inducing competition and innovation. Many countries outside Europe, even developed ones, still have very rigid barriers for new entrants. This certainly keeps the cost high and incumbents happy.

The best thing a country can do to make the rules of engagement really clear and transparent and think through: “what if someone came in with a new payment service or a payment instrument – how easy it would be for them to get started in our market, while retaining the security of customers”

Competition and competition among innovators is the only feasible driver to lower the cost of payments and include communities in modern banking, who  currently cannot afford the traditional service.