Last week Jugo invited me to speak in Ljubljana for an audience of 200 Slovenian entrepreneurs about my experiences from disrupting a huge market in a really lean way with TransferWise. I was intrigued to visit the source of the legendary #slovenianmafia, which has created tech successes like Zemanta, Vox.io, Flaviar and contributed their brains into building many other startups, including TransferWise. 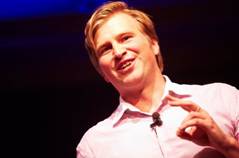 Thanks to my new friends in Ljubljana we heard what is on the mind of local entrepreneurs and others like Jugo, who are actively creating an ecosystem for fast growing technology businesses of Slovenia. One can draw parallels with a positive movement that I have seen taking place in Estonia recently. 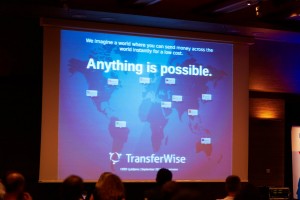 Both of our small countries share a point in history when rather suddenly the entire economy collapsed. One day every soviet factory, shop, collective farm, car repair shop lost its customers, budgets, leaders and purpose.

We had to start from 0 again. People quickly worked out, how to put their skills to use and small co-operatives sprung up servicing the local economy. They soon started outsourcing their work to Scandinavia. We were creating little wooden bits for Ikea, subcontracting software development for Siemens and filling orders from as far as Dubai. It gave us a generation of DIY enterpreneurs.

The “make something” generation

This meant an OK life to this generation, as long as the foreign investment and cheap credit kept flowing in to the country. Now we are seeing a new generation, the sons and daughters of these first starters, who were brought up with the ideals that anything is possible and yet who aspire to do more than just sell their time and skills on the European outsourcing market to the highest bidder. I hope they will be our Product Generation.

Estonia already has this fantastic Skype story, which is inspiring a generation of tech people. And we have the handful of people, who built up the Baltic banking sector and then sold it to bigger Swedish banks. We have more recent examples of product people, who invented a bolt-on viewfinder, which turns a DSLR cameras into an HD video camcorder and has become a worldwide hit. People are inventing high-tech flower pots to grow your own lunch and dinner on the windowsill.

Crossing from service to product

Turning a consulting shop into a product business is notoriously hard. Good development teams often come up with lots of great ideas of products that would be useful, it is just very hard to turn away solid cash flow from development projects and invest the team’s time in unprofitable and super risky product development. But worst – even if you get initial validation on the product idea, then changing the culture in the team from software engineers and project managers to product owners can be incredibly difficult. It may be a better idea to spin-off the product and nurture it in a totally independent team and environment.

37Signals famously made a transition from web development to a super successful Software-as-a-Service business. Much the same way Klika in Slovenia evolved from writing code by spec to developing sports-intelligence products and merged recently into Sportradar. Estonia’s two more successful tech products, mobile payments gateway Fortumo and java deployment tool ZeroTurnaround, were both spun-off from parent companies, who were once successful software development shops.

In order to make the switch from the outsourcing services economy to the product economy, both Estonia and Slovenia need to inspire a generation of product entrepreneurs. The failure rate in building products is 10x higher than in outsourcing, thus is does not hurt to remind ourselves that both the satisfaction and financial outcome of building great products is 100x of that in successful outsourcing.